Commissioned by Philips Real Estate, Verhoeve carried out a soil remediation on the former Philips Lighting site in Maarheeze.
Various parts for lamps have been manufactured at this location in the past, resulting in serious soil contamination with heavy metals. Specific points for attention for this remediation were the quick start and short time schedule (delivery before 01-01-2016). Verhoeve was commissioned on Thursday, November 29, 2015 to carry out the remediation work and to complete it by December 31, 2015 at the latest, and on Tuesday, December 2, 2015, full implementation was operational.

The remediation consisted of excavating the contaminated soil 5,780 tons (3,400 m³), the heavily contaminated soil was loaded directly onto trucks and transported to a soil treatment facility. After remediation, the excavation sections and a previously removed basement had to be supplemented with approximately 8,240 m³ of sand from the depot that was present at the location. Due to the expansion of the areas to be remediated, a total of 12,625 tonnes of contaminated soil was ultimately excavated and removed by Verhoeve Milieu & Water and 14,850 m³ of sand was removed from the depot and processed in the various excavation sections.

In addition to the soil remediation, Verhoeve Milieu & Water also carried out the demolition of the basement of the former water tower. The basement walls were found to have been treated with a bitumen product, as a result of which all the debris released was eventually transported to the processor as contaminated material. A total of 1,140 tonnes of contaminated rubble was removed.
Despite the substantial deviations in quantities, Verhoeve was able to complete the work well before December 31, 2015 to the full satisfaction of the client. 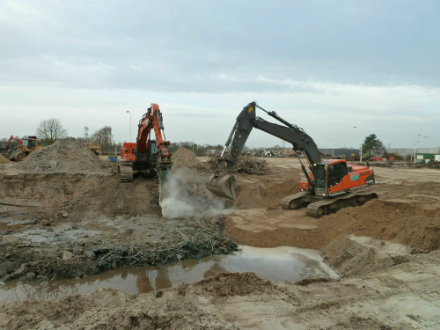